Journal of Positioning, Navigation, and Timing

The Institute of Positioning, Navigation, and Timing (항법시스템학회)

GNSS analysis centers started providing precise satellite orbits and satellite clock products. The positioning accuracy has improved for recent PPP users using these information. In the past, user’s precise positioning was calculated using measurement data and products from only GPS and GLONASS in the existing PPP. More recently, however, user’s position accuracy has improved significantly in the current PPP as precise satellite orbits and clock products of Galileo in the European Union, BeiDou in China, and Japanese Quasi-Zenith satellite system (QZSS) in addition to GPS and GLONASS were provided by GeoForschungsZentrum in Germany and Wuhan University in China. The problem is that PPP requires at least 20 min in the early converging stage to obtain the user’s accurate position information. To overcome this problem, a number of studies have been conducted such as the use of multi-GNSS observation data (Cai & Gao 2013, Zhao et al. 2013, Cai et al. 2015), the use of improved upper atmospheric model (Hernández-Pajares et al. 2007, Elmas et al. 2011), and PPP Ambiguity Resolution (AR) (Ge et al. 2008, Geng et al. 2010). The initial convergence time was dramatically reduced to less than five min by applying the PPP AR among the above methods. However, some limitations in PPP still needed to be overcome such as initial convergence speed and real-time utilization.

The RTK does not need precise satellite orbits and clocks in contrast to PPP. On the other hand, the RTK requires correction information about state space representation from GNSS reference station network or observation data from specific GNSS reference station. GNSS reference station should have its own accurate position information. The performance of RTK is dependent on the baseline range between the reference station and user. Assuming that there is no rapid change in the ionosphere and troposphere in a short baseline within 20 km, the integer ambiguity number is easily determined thereby a positioning accuracy within a several cm distance can be obtained (Wielgosz et al. 2005). However, GNSS signals passing through the upper atmosphere change in a medium baseline from 20 km up to 100 km of the baseline distance so these elements are not removed even by a numerical differencing method. As a result, the degradation of probability that determines the integer ambiguity and a longer initial convergence time happen due to the residual error. These will eventually cause the reduction in positioning accuracy of users (Teunissen 1995). The upper atmosphere and reduction in the number of common satellites are more influential in a long baseline whose baseline distance is over 100 km than in a medium baseline. The users of GNSS dual-frequency receivers may improve the position accuracy by nearly removing the error due to the ionosphere, which is the largest error in the signal transmission. However, since users of GNSS single frequency receivers do not remove the ionospheric error directly, the error is separately estimated or models and global ionosphere maps products are additionally utilized to improve the location accuracy. However, the RTK performance of single frequency users in medium and long baselines is still poor compared to that of dual-frequency users.

China has developed a GNSS system called BeiDou (BDS) and aims to operate the system in full scale by 2020. The regional navigation satellite system (RNSS) has been already completed, which consists of five satellites in the geostationary earth orbit and five satellites in the inclined geosynchronous orbit. Since BeiDou RNSS is operated intensively in South East Asia, studies on precise positioning using GPS and BDS have been conducted (Chen et al. 2016, Paziewski & Sieradzki 2017).

In this study, we develop a relative positioning algorithm using GPS and BDS observation data and analyzes the positioning performance for the long baselines between a reference station and rovers. In addition, the data processing methods according to each baseline distance are divided into GPS-only, BDS-only, and integrated GPS+BDS and applied in order to compare the position accuracy. The effect of relative dilution of precision (RDOP) in the relative positioning determination is also considered.

Table 1 presents the data processing strategy used in the relative positioning determination. For the baseline length (BL) between the reference station and user, three BLs are selected: 128 km, 216 km, and 335 km. Parameters such as location and the integer ambiguity are estimated in every 30 sec using the Extended Kalman Filter. This study also uses Global Mapping Function (GMF) and Global Pressure and Temperature (GPT) 2 models to estimate the tropospheric delay error.

The tidal effect due to the Earth and the pole was compensated by using a model provided by the International earth rotation service (IERS) conventions 2010, and the effect of ocean tide was compensated by using the Finite Element Solution (FES) 2004 model. For the phase center offset (PCO) and phase center variation (PCV) of the GNSS satellites and receiver’s antenna, the IGS14.atx files that contained antenna information were used. The antenna information in the IGS14.atx files was updated in early 2017 replacing the existing IGS08.atx based on the International Terrestrial Reference Frame 2014. Although the tidal effect slightly varies according to regions, it may reach up to 30 cm in the altitude direction in the Korean Peninsula. In addition, the value of PCO differs depending on the receiver type, and the PCV shows a several cm difference before and after its application.

A total of three relative baselines were selected based on the DAEJ GNSS RS for the long baseline relative positioning experiment using GPS and BDS system. The baselines consist of DAEJ-SKMA, DAEJ-KOHG, and DAEJ-JEJU, respectively. The BLs were approximately 128 km, 216 km, and 355 km from the RS. The configuration of the baselines for the long baseline relative positioning is shown in Fig. 1 in detail. Table 2 presents the RS and GNSS receiver types of the users. DAEJ as the RS employs Trimble NetR9 receiver, and SKMA, KOHG, and JEJU, which were consisted of users, employ the same type of receivers used in the RS. The Trimble NetR9 used in the experiment can receive navigation signals from GPS, GLONASS, Galileo, BeiDou, and QZSS. 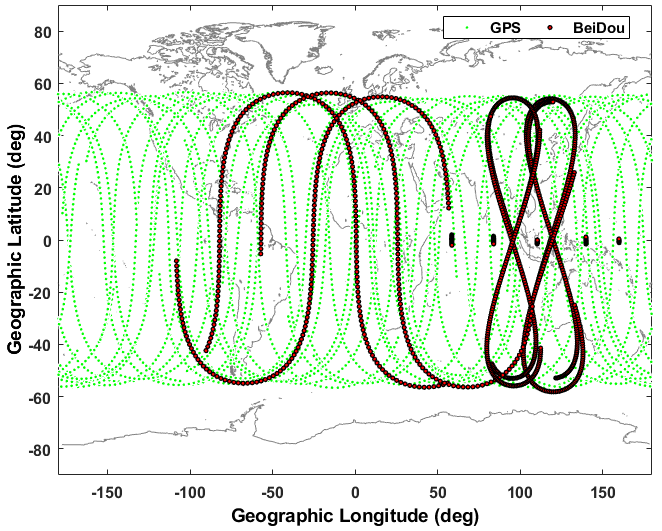 Fig. 3 shows the position error in the navigation coordinate according to three different BLs in a time series. Data processing of GPS-only, BDS-only, and integrated GPS+BDS was performed respectively using the Multi-GNSS Analysis Software developed by the Korea Astronomy and Space Science Institute to compare and analyze the position error of relative positioning. In addition, the results calculated by high-precision GNSS software Bernese 5.2 developed by the University of Bern in Switzerland were assumed as the true value for high accuracy position of users in the comparative analysis of position error. Fig. 3a shows the calculation of position error in every 30 secs using the observation data of DAEJ and SKMA whose BL is 128 km. The red-dotted line and blue-dotted line indicate GPS-only and BDS-only, respectively, and the green solid line indicates the integrated GPS+BDS data processing result. As shown in the time series by position component in Fig. 3a, the location accuracy of GPS-only was superior compared to BDS-only. The figure shows that the position accuracy is significantly degraded particularly in the up direction in the case of BDS-only. The integrated GPS+BDS showed a slight improvement on initial convergence speed and position accuracy compared to those of GPS-only. 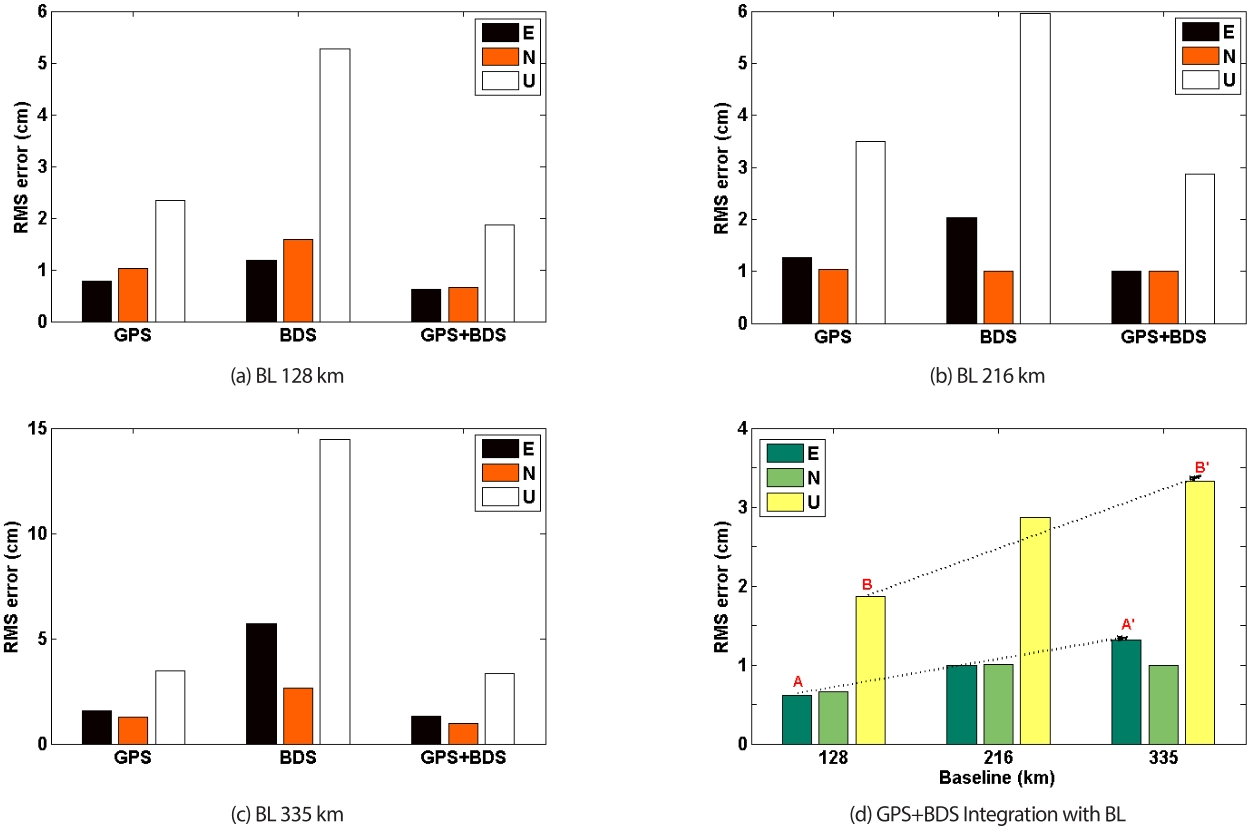 Fig. 5 shows the estimated wet delay errors in the troposphere that are double differenced values with each of the BLs in a time series. The wet delay error in the troposphere is highly affected by the difference in atmospheric environment between the reference station and user. As shown in Fig. 5, the estimated values with each of the BLs change approximately within a range of 10 cm.

DOP is an indicator that represents a level of geometry of GNSS satellite constellation. The precision probability becomes higher as the DOP value is smaller. Reversely, the precision probability is degraded as the DOP value increases. DOP can be expressed by the following indicators: horizontal DOP, vertical DOP, position DOP, time DOP, and geometric DOP. In this study, RDOP, which is an indicator that is related to user’s position precision in relative positioning, was calculated by each of the BLs.

Here, the RDOP value changes continuously as the position and GNSS satellite constellation changes over time. In addition, the change in the RDOP value is directly related to the number of visible satellites. Fig. 6 shows the RDOP value calculated using the observation data received at three BLs in a day on January 1, 2019. The RDOP value was calculated by each of GPS-only and integrated GPS+BDS, and daily averaged values were calculated within the 95% confidence interval.

This study selected three BLs to comparatively analyze the positioning accuracy of relative positioning with regard to 100 km or longer BLs, and performed data processing using GPS-only, BDS-only, and integrated GPS/BDS, respectively. The data processing results revealed that position errors increased in all of GPS-only, BDS-only, and integrated GPS/BDS as the BL became longer. Note that the position accuracy of BDS-only was significantly degraded as the BL increased. In particular, the position error in the up direction component increased further.

In addition, the RDOP, which is a reliable indicator in user’s position determination, was calculated and analyzed. The RDOP according to BLs were very similar without a significant difference. The RDOP using only GPS-only was less than two in all BLs, which was highly reliable to obtain the position precision. In addition, the RDOP by the integrated GPS/BDS was smaller than that of GPS-only by 0.45 to 0.50 in all BLs in a relative sense. The smaller RDOP value indicated that more reliable position precision could be acquired. Conclusively, the integrated GPS/BDS could improve positioning accuracy and position precision compared to those of GPS-only and BDS-only.

This study was supported by the 2019 Primary Project of the Korea Astronomy and Space Science Institute (project: Space Environment Research).

The authors declare no conflict of interest.