Journal of Ecology and Environment

The Ecological Society of Korea (한국생태학회)

Survey on the distribution of Macrofungi in Mongolia

This paper reports the species of macromycetes collected in Mongolia: all the species are new to the area. Brief notes on taxonomy, ecology and distribution of the species are added. A total of 30 species of macromycetes were registered, 1 belonging to the division Ascomycota and 29 to the division Basidiomycota. It has been registered that 30 species belong to 25 genera, 17 families and occur in the flora fungus of Mongolia, until now. Specimen for 150 of samples macromycetes collected from June to August, 2015 in Tuv, Arkhangai and Huvsgul were enveloped. Macromycetes have been occured in 9 of 16 geographic regions. According to our studies 2 species in Khubsgul region, 2 species in Khangai region, 3 species in Khingan, 3 species in Dornod Mongol, 1 species in Khentei regions newly registered respectively. As a result of this work, determined 7 species (23%) of macromycetes in forest steppe and steppe regions and 23 species (77%) of them in forest region. The trophic structure for the fungal species is as follows: 2 species lignophite (7%), 4 species moss saprophyte (13%), 5 species soil saprophyte (17%), 15 species mycorrhiz (50%) of all species were respectively.

The study of classification, species and distributions of macrofungus has not being completed yet in Mongolia (Petrov 1999, Uranchimeg et al. 1984 Kherlenchimeg 2009, 2013).

First registration and data piling was done in Department of Botany, Institute of General and Experimental Biology, MAS.

Mongolian researchers have been studying taxonomy of largest family. For example, the taxonomies of families Hygrophoraceae (Uranchimeg and Kovalenko 1987), Agaricaceae (Kherlenchimeg 2014) have been reported.

The purpose of this study is to the flora macrofungi of Mongolia and as well as to determine species composition of the macromycetes registered and compare their flora analysis, traditional knowledge, ecological groups, growing environment and occurrence.

Specimens of the macromycetes taken from the Herbarium, Ulaanbaatar Academy (UBA)of the Department of Botany, Institute of General and Experimental Biology, Mongolian Academy of Sciences, and an additional data

were used in this study. Specimen enveloped 150 of samples macromycetes collected from June, 2015 to August, 2015 in Tuv, Arkhangai and Huvsgul. The nomenclature and taxonomy are based on following works of (Singer 1986), (Moncalvo et al. 2000) and following professional taxonomic databases and wesites: indexfungorumorg.name (2015).

The sampling and herbarization of materials were done according to the classical methodologies (Bondartsev 1950).

The geographical distribution data was carried in phyto-geographical regionalization (Grubov 1982) of the Mongolia (Fig. 1).

There have been registered that 30 species belonging to 25 genera, 17 families and occur in the flora fungus of Mongolia as present (Table 1).

Table 1.Distribution of macromycetes in Mongolia by order, family and genus

Mongolian macromycetes have been registered in 9 of 16 geographic regions as a marked by red plus in Table 2. According to our studies from June 2015 to August 2015, 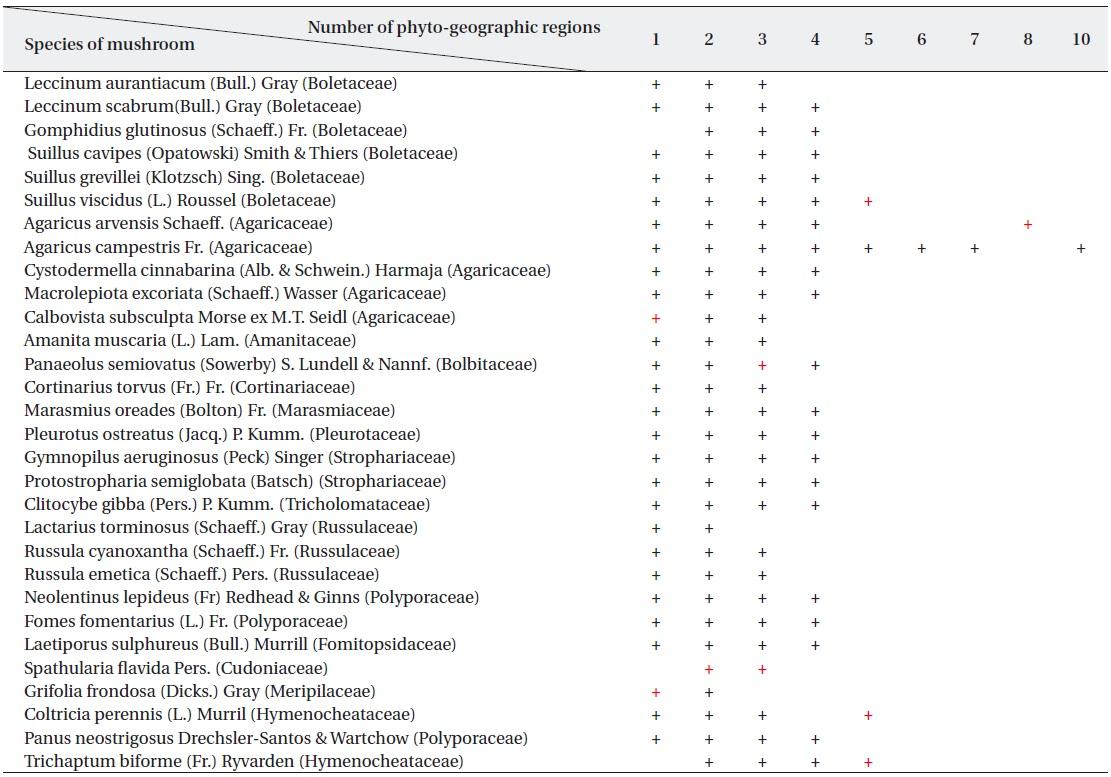 Leccinum aurantiacum, L. scabrum, Lactarius torminosus and Russula cyanoxantha growing in desiduous and coniferous forests or occurring only in mycorrhizal association with birch trees. Cystodermella cinnabarina, Amanita muscaria, Cortinarius torvus, R. emetica grow singly, scattered, or in groups in sphagnum moss near bogs, and in coniferous and mixed forests. Pleurotus ostreatus, Gymnopilus aeruginosus, Panus neostrigosus, Fomes fomentarius and Trichaptum biforme growing in birch, birch-larch, larch-aspen-birch forests. Neolentinus lepideus, Laetiporus sulphureus is a saprophyte and occasionally a weak parasite, causing brown cubical rot in the heartwood in the roots, base and stem. Gomphidius glutinosus, Suillus cavipes, S. viscidus and S. grevillei is grows in the soil of coniferous or mixed forests, not always at the foot of larch (mycorrhizal) with which it lives in symbiosis. Clitocybe gibba, Spathularia flavida, Coltricia perennis and Grifolia frondosa are grows in coniferous forests, on needle or leaf litter, also on bare earth among grasses and mosses. Agaricus arvensis, A. campestris, Calbovista subsculpta, Macrolepiota excoriata and Marasmius oreades are grows in steppe, meadows and pastures. There are grows singly, in groups, or occasionally in clusters. Protostropharia semiglobata is grows in steppe on dung and Panaeolus semiovatus grows in horse dung (Table 3). 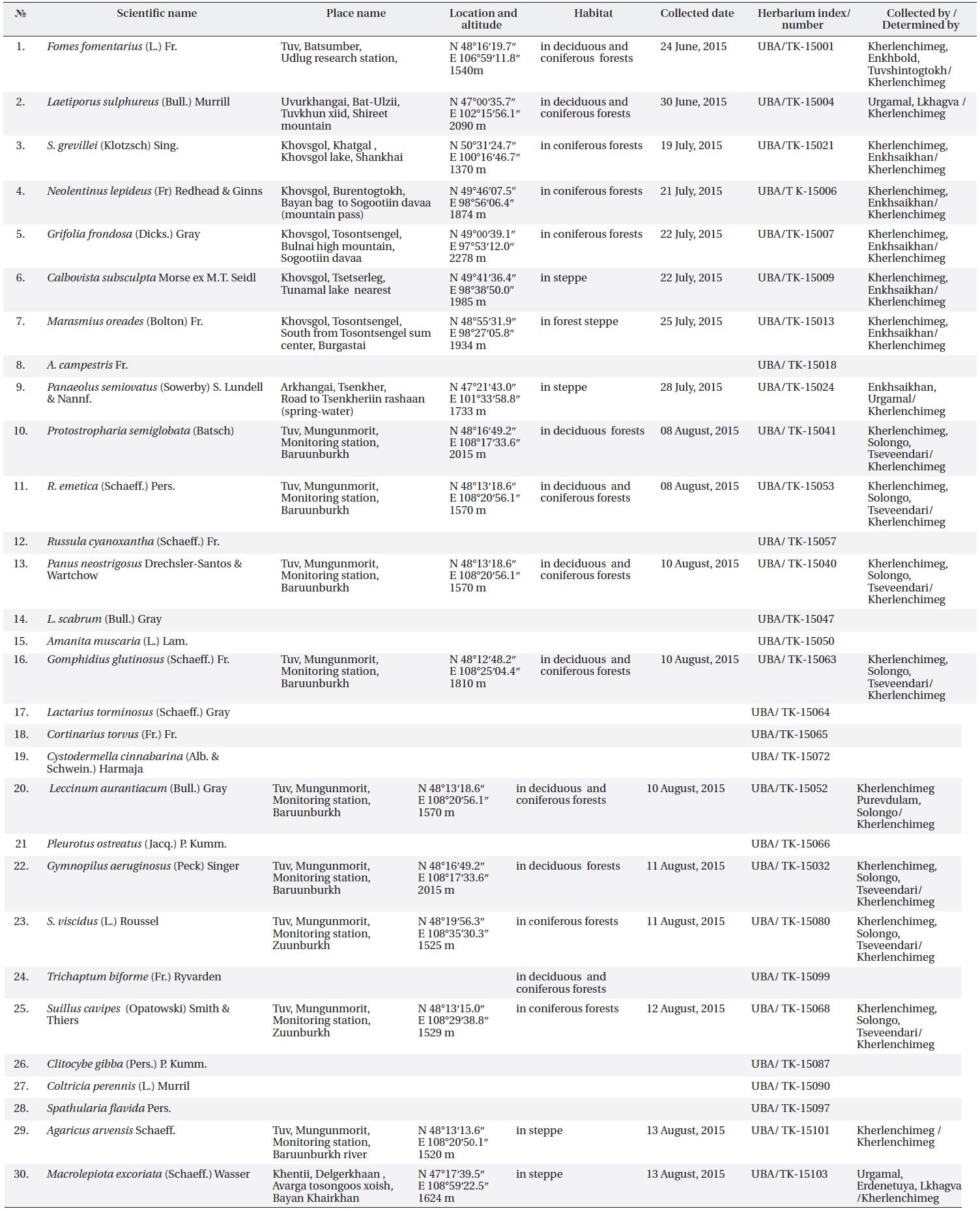 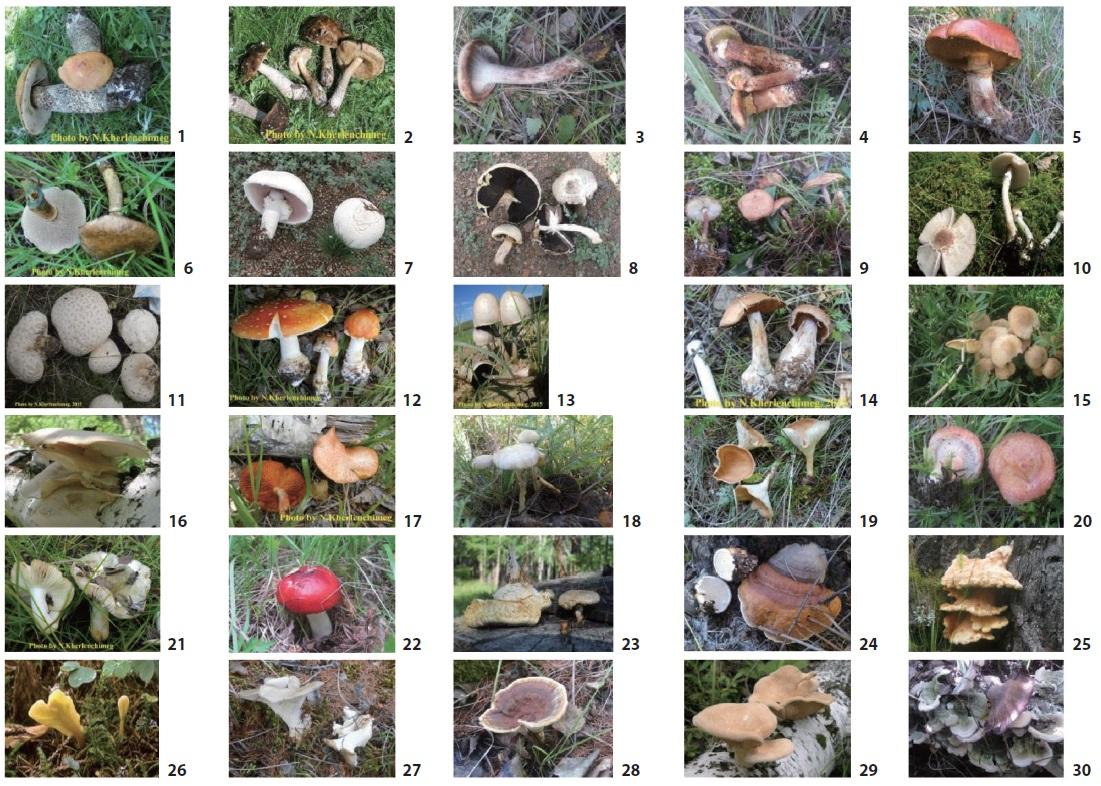 L. aurantiacum, L. scabrum, G. glutinosus, S. cavipes, S. viscidus and S. grevillei are a favorite species for eating and can be prepared as other edible boletes. Traditionally, there are (A. arvensis, A. campestris, P. ostreatus, M. oreades) frequently used in Japanese, Korean and Chinese cookery as a delicacy: it is frequently served on its own, in soups, stuffed, or in stir-fry recipes with soy sauce. L. sulphureus is quite medicinal, and it’s the perfect way to let food be your medicine, and medicine your food. S. flavida has been described by authorities variously as inedible, of unknown edibility, or edible but tough. C. perennis, G. frondosa and T. biforme are a very recent study using human participants. P. semiovatus is while some guides list this species as edible, a few people experience gastric upset after consumption.