Bulletin of the Korean Chemical Society

The 43-residue defensin-like peptide coprisin, which is isolated from dung bettle, Copris tripartitus, is a potent antimicrobial peptide. In our previous work, we determined the tertiary structure of coprisin and found that alpha helical region of coprisin from residue 19 to residue 30 is important for its antimicrobial activities. Here, we designed cop12mer and cop9mer analogs of coprisin based on the tertiary structure of coprisin. To investigate the relationship between hydrophobicity and antimicrobial activities and develop the potent peptide antibiotics, we designed cop9mer-1 with substitution of with Trp in cop9mer. The results showed that cop9mer-1 has higher toxicities as well as improved antimicrobial activities compared to cop9mer. In order to reduce the toxicity of cop9mer-1, we designed cop9mer-2 and cop9mer-3 with substitution of with Lys or Ser. Substitution of with these hydrophilic amino acids results in lower cytotoxicities compared to cop9mer-1. Cop9mer-2 with substitution of with Lys in Cop9mer-1 showed high antibacterial activities against drug resistant bacteria without cytotoxicity. Antibiotic action of cop9mer-1 analog appears to involve permeabilization of the bacterial cell membrane while cop9mer-2 and cop9mer-3 may have different mechanism of action. These results imply that that optimum balance in hydrophobicity and hydrophilicity in these 9-meric peptides plays key roles in their antimicrobial activities as well as cytotoxicities.

More than 200 antimicrobial peptides isolated from insects were identified to date. Defensins are one of the antimicrobial peptide groups, which have conserved beta-sheet structure and intramolecular disulfide bonds.6-8 To date, defensins including HNP-1 to 5, drosomycin, sapecin and lucifensin were discovered from a variety of organisms.8-13 These defensins showed antimicrobial activities against gramnegative and gram-positive bacterial strains.6-13 Particularly, defensins from insects seems to be very active to various kinds of bacteria. Protaetiamycine, for example, having 43- amino-acids antimicrobial peptide is one of defensin-like antimicrobial peptide which isolated form larvae of a beetle, Protaetia brevitarsis.14-16 In order to develop potent peptide antibiotics, we developed the 12-meric peptide which has the residue at alpha-helical region of protaetiamycine as well as its 9-meric derivative.14 To increased antifungal and antimicrobial activities, sequence of 9-meric analogs have been optimized with hydrophobicity and cationicity.14-16

Coprisin (VTCDVLSFEAKGIAVNHSACALHCIALRKKGGSCQNGVCVCRN-NH2) is a 43-residue defensin-like antimicrobial peptide which isolated from a Korean dung beetle, Copris tripartitus.17 In our previous study, coprisin shows the antimicrobial activities with low toxicities against mammalian cells and induces apoptosis against C. albicans.17,18 Coprisin also has anti-inflammatory activities in LPS-stimulated RAW 264.7.17 Three dimensional structure of coprisin has been determined using nuclear magnetic resonance spectroscopy and consists of two beta-sheets and one amphipathic alpha-helical structure linked by three disulfide bonds.17 Since the alpha-helical structure from Ala19 to Lys30 (ACALHCIALRKK-NH2) was revealed as the active domain for coprisin activities,18 we designed cop12mer with this active region in this study. The three residue truncated peptide (LHCIALRKK-NH2), called cop9mer, also designed to develop potent peptide antibiotics with short length.19 In this study, we focused on the short antimicrobial peptide, cop9mer and the balance between hydrophobicity and hydrophilicity on antimicrobial activities of peptides were examined. We designed 9-mer peptide analogs of cop9mer to increase antibacterial activity without cytotoxicity and investigated their antimicrobial activities as well as mechanism of action.

Peptide Synthesis. Coprisin analogs were synthesized by the standard Fmoc-based solid-phase method. The peptides were purified by reverse phase high-performance liquid column on a Vydac C18 column (20 × 250 mm, Shim-pack) using an appropriate 0-90% water/acetonitrile gradient in the presence of 0.05% trifluoroacetic acid. The final peptides have over 98% purity. The molecular mass of the purified peptides was determined by matrix-assisted laser-desorption ionization-time-of-flight mass spectrometry (Shimadzu, Japan).

Calcein Leakage Assay. Calcein-cetrapped large unilamellar vesicles (LUVs) composed of egg yolk L-α-phosphatidylcholine (EYPC)/egg yolk L-α-phosphatidylglycerol (EYPG) (7:3, w/w), or egg yolk PC/cholesterol (CH) (10:1, w/w) were prepared as previously described.22 The leakage of calcein from LUVs was monitored by measuring fluorescence intensity using an excitation wavelength of 490 nm and an emission wavelength of 520 nm. All fluorescence experiments were performed in quartz cuvettes with a 1-cm path length using a model RF-5301PC spectrophotometer (Shimadzu, Kyoto, Japan). Vesicles dissolved in Tris buffer containing 10% Triton X-100 (10 μL were used to establish 100% dye release). The percentage of dye leakage caused by peptides was calculated in the following equation, dye leakage (%) = 100 × (F − F0)/(Ft − F0), where F is the fluorescence intensity of peptide-treated vesicles, and F0 and Ft are fluorescence intensities without the peptides and with Triton X-100, respectively.

Activities of antimicrobial peptides are affected by a number of parameters, including net charge and hydrophobicity. In our previous study on protaetiamycin which is one of defensin-like antimicrobial peptide in insect, alpha helical region of the peptide which is consisted of 12 residues was important for its antimicrobial activities.14-16 Truncated 9-meric analogs remained antibacterial activities and we found that peptides with high hydrophobicity by substitution with Trp increases antimicrobial activities of peptides.15,16 It is well known that Trp interacts with bacterial cell membrane strongly and the aromatic ring inserted deep into the cell membrane. As listed in Table 1, coprisin analogs were synthesized based on the structure of coprisin (Figure 1). Cop12mer has been designed with the sequence in the active alpha helical region of coprisin from Ala19 to Lys30 (ACALHCIALRKK-NH2). The three residue truncated peptide (LHCIALRKK-NH2), called cop9mer, also designed and synthesized. In order to increase the antibacterial activities of 9-meric analogs of coprisin, we designed Cop9mer-1 with substitution of Trp for His2 which has increased hydrophobicity and stronger interaction with cell membrane than cop9mer.

Table 1.aNet charge was calculated using sum of each of the amino acid charge at pH 7.0. bHydrophilicity is the total hydrophilicity (sum of the hydrophilicity indices of all the residues) divided by the number of residues, according to the Hopp and Woods index.23 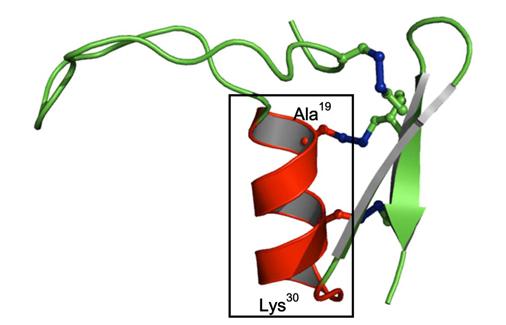 Figure 1.The tertiary structure of coprisin in DPC micelles at pH 4.3. (PDB ID : 2LN4) Active site including alpha helix from Ala19 to Lys30 in red is shown with box.

The antimicrobial activities were measured against the four standard bacterial strains, including two Gram-negative species (E. coli, S. typhimurium and) and two Gram-positive species (B. subtilis, and S. aureus). Antimicrobial activities of cop9mer-1 were compared with coprisin, cop12mer and cop9mer. As listed on Table 2, Cop9mer-1 showed much higher antimicrobial activities than cop12mer and cop9mer. We next investigated hemolytic activity of cop9mer-1 against human red blood cells by measuring the extent of lysis of hemoglobin caused by the peptide. The results suggested that the cop9mer-1 is cytotoxic at high concentration and had 31% hemolytic activity at 100 μM as shown in Figure 2.

Table 2.aThe geometric means (GM) of the MIC values from all four bacterial strains are shown. bMHC is the minimal peptide concentration producing hemolysis. When no detectable hemolysis was observed at 100 μM, a value of 200 μM was used to calculate the therapeutic index. cThe ratio of the MHC over the GM of MIC is shown. Larger values indicate greater cell selectivity 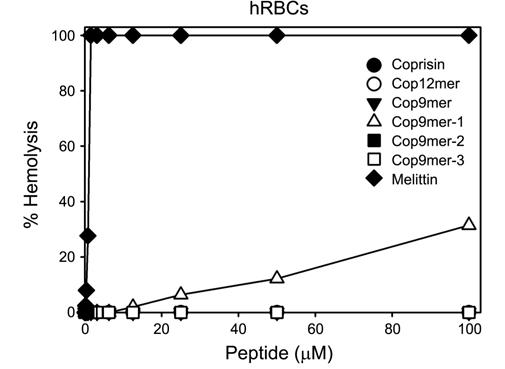 Table 3.aThe geometric means (GM) of the MIC values from all four bacterial strains are shown. bMHC is the minimal peptide concentration producing hemolysis. When no detectable hemolysis was observed at 100 μM, a value of 200 μM was used to calculate the therapeutic index. cThe ratio of the MHC over the GM of MIC is shown. Larger values indicate greater cell selectivity. 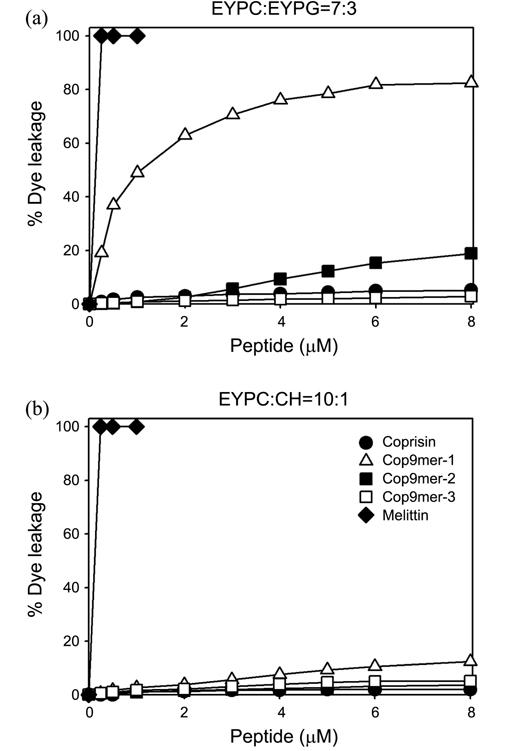 Figure 3.Dose-response curves of calcein leakage from (a) EYPC/EYPG (7:3, w/w) and (b) EYPC/CH LUVs (10:1, w/w) LUVs induced by the peptides. Calcein leakage was measured 2 min after adding the peptide. The 200 μM lipid was used in the leakage experiments.